Happiness is a Hula Hoop 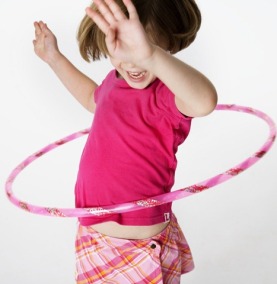 When was the last time you treated your hips to the gentle caress of a hula hoop?  If it’s been more than a few years, you may be under the misapprehension, as I was, that using this classic toy is like a riding a bicycle – you never forget how.

I’d read about a new exercise class using weighted hula hoops. It sounded like fun, so I decided to buy myself a hoop and get in on the action.

I’d had some success with the hula hoop game on my Wii Fit video exercise system and fully expected the skillful technique I had as a child to come back to me quickly. I’d never forgotten how to ride a bicycle, after all.

Well, my mind may have remembered, but my hips seemed to have developed amnesia.

I have a theory about past accomplishments: I can still do anything I have ever done…until I try and fail.  In my mind I was still the schoolyard hula hoop champ, until a week ago when I pulled that plastic circle over my head, gave it a spin, and caused my sons to collapse in hysterics at my wildly gyrating hips as I failed, time and again, to keep the toy spinning around my middle.

Eventually, through dogged persistence, I was able to keep the thing going long enough to get a workout, but the experience was eye-opening. For one thing, I hadn’t realized how much flexibility I’d  lost over the years. Hopefully, I will get some of that back by exercising. The second, and greater, lesson was to always be aware of how easy it can be to lose one’s gifts, if one fails to exercise them.

It’s been said that if you want to feel a certain way,  you should act as if you already do. The deed can come before the motivation and even create it. Could it be that exercising spiritual gifts could not only keep a person from losing them (like flexibility and skill with the hula hoop), but might actually help us to acquire them in the first place?

I sometimes have difficulty feeling a particular fruit of the Spirit, but perhaps the act needs to come first. I think I’ve got another exercise to add to my regimen. Wish me luck!