How bouncy are you? The Coefficient of Restitution Revisited

I have a friend who, through no fault of her own, seems to run into more than her fair share of bad luck. Amazingly, no matter what blows she experiences, she always bounces back, somehow.

Thinking of how she “bounces back” makes me remember a term I learned in Physics class, coefficient of restitution.

The coefficient of restitution  is a number which indicates how much kinetic energy (energy of motion) remains after a collision of two objects. 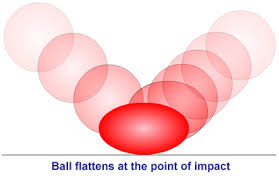 In simplest terms, if an object has a high coefficient of restitution (C of R) it will bounce back when thrown against a hard surface, returning to its original shape, while something with a very low C of R tends to go “splat!”

What determines an object’s C of R, is the material from which it is made.

A rubber ball has a high C of R and chocolate pudding doesn’t.  It is not a matter of positive thinking that makes the difference.

So, why do some people, like my friend, seem to bounce back repeatedly from the hard knocks of  life, while others fall apart like a spoonful of mousse at the first impact?

We all have the same basic physical make-up, but people have more than physical

We have emotional and spiritual components, as well.

I believe it is the spiritual component that determines our C of R, more than anything else.

Faith in a God of love as described in Romans 8:28, “And we know that all things work together for good to those who love God, who have been called according to his purpose,” gives a person the resiliency to bounce back from the assaults and insults of this world, again and again.

1 Response to How bouncy are you? The Coefficient of Restitution Revisited