The Invention of Lying

I recently watched the movie The Invention of Lying with Ricky Gervaise. 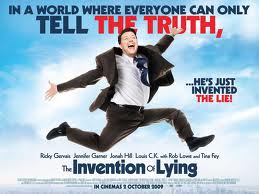 a cute concept: in a world where everyone tells the absolute truth and there doesn’t even exist a word for falsehood a man stumbles upon the concept of telling lies.

In this alternate world everyone is absolutely pragmatic and has no imagination.  Even entertainment is based upon historical facts read aloud.

The world of Gervaise’s character is bland and depressing, so when circumstances make him desperate enough to say something that “isn’t” we are sympathetic with his discovery of the power of encouragement and hope. We overlook the lies he tells for purely personal gain because the rest of his world is so unsympathetic. We can identify with Gervaise’s character, but not with the rest of this humorless, gullible population.

It was my growing fondness for the main character that made me all the more uncomfortable when he began to “make up” the concepts of God and Heaven.  As the masses swallow his “lies” he becomes rich and famous, but not happy. It is only after he confesses his fraud that he finds happiness at the film’s conclusion.

The film’s depiction of the eager response of this world’s people to the promise of an all-powerful God and eternal life came close to illustrating our genuine need of the Gospel message, but the believers in the film were once again depicted by the movie industry as naive, slightly dim sheep, grasping at straws. 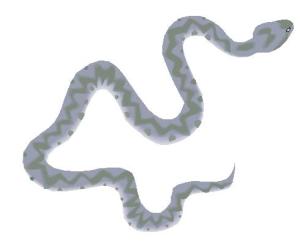 I was reminded of the insidious messages we are all being fed with our entertainment. For those of us who know the truth this is merely unsettling or annoying.

For the people who are spiritually immature, or still trying to make sense of the world and their place in it, being served this constant diet of falsehood can be disastrous.

As believers we  have an additional responsibility to spread the Good News and testify to the hope we have in Christ Jesus.  We carry the burden of doing everything we can to counter the humanistic messages of the powers of this world with the truth.

We must be aware of the sophisticated modern propaganda techniques used for everything from promoting (or degrading) political candidates to selling deodorant.

While it is only natural to feel helpless against such well-organized campaigns, we have the supernaturally powerful on our side.

Lying was invented in the Garden of Eden, but always and ever  the mighty word of truth was.