I read an article today about a woman who won a $112 million  lottery prize. She insists that the reason she won is because she visualized herself winning. She believed that she would win and the power of her belief made her vision a reality. She even claims to have envisioned the exact amount of her winnings and the very shirt she would be wearing when she won.  This woman has taken the philosophy of the power of positive thinking to the extreme…and apparently benefited from it.

There is in today’s culture a trend to emphasize the act of faith, the power and benefits of  belief, irrespective of what is believed. We are encouraged to find something, no matter what, to believe in, similar to that generic “higher power” of the twelve-step programs.  Even the theme of the Macy’s Thanksgiving Day Parade and Christmas advertising campaign was just  “Believe”.

This is humanism dressed up to appear spiritual. Man’s eternal quest to become his own god.

If it is the power of belief, or “visualization” that controls our reality, then what we have is witchcraft, or maybe “wish-craft”, rather than faith. 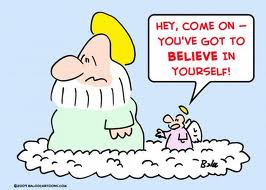 The Bible tells us that it is important to have faith in God and to believe his words in order to enjoy all the blessings he wants to give us.  When we read that it takes only faith as of a tiny mustard seed (the mustard seed that can grow into a mighty plant, when nurtured) to move mountains, it is only one of many passages that clearly point out that it is the power of the one in whom we place our faith that matters, rather than the strength of that faith.

A strong faith is a bulwark against doubt and helps us to trust and obey our Lord. It does not take his place.

By all means, believe in yourself and work to achieve great things with the gifts God has given you. Pray and study to strengthen your faith and belief in God’s truth.  Believe that you can do all things through him.  But beginning to believe in the power of your own believing leads away from the truth.

When I was a little girl I wanted a horse, desperately.  Every birthday and every Christmas I believed I would be given a horse. I visualized myself riding and caring for my beautiful animal. I knew what I would wear when I rode her and every detail of her appearance and character. I believed as only a child can that this vision would become reality.  Perhaps my visualization was flawed because that horse never stepped out of my imagination into my backyard.  If only that lottery-winning woman had been able to come to me then and teach me her technique of visualizing and believing…I might have had a whole herd of glorious palominos to ride.

Well, I don’t believe that. Do you?

I write Christian fiction under my maiden name, J.B. Hawker.
View all posts by Jonna Hawker Turek →
This entry was posted in Personal Musings, Spirituality. Bookmark the permalink.

1 Response to Only Believe?